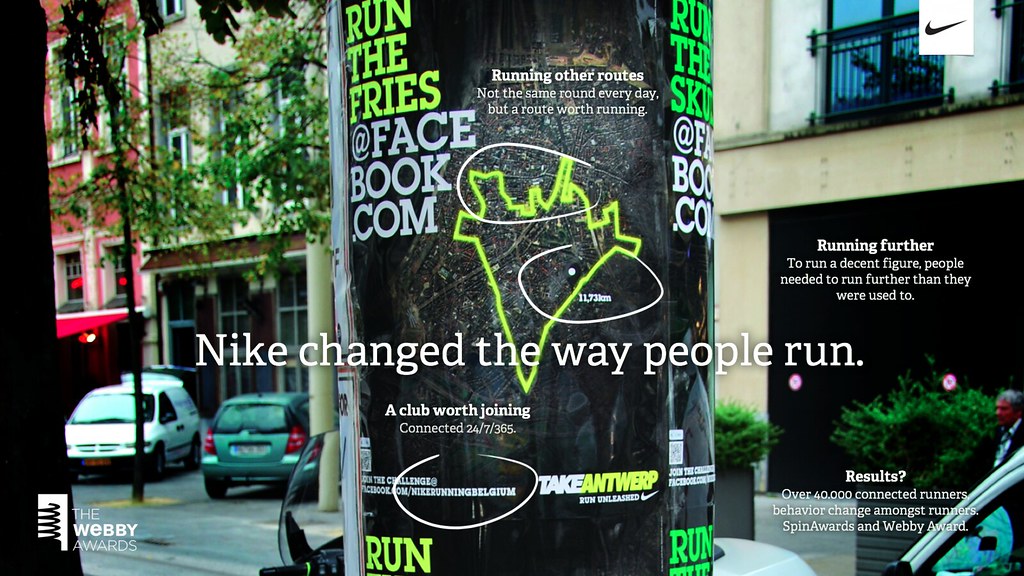 Does Nike really need an introduction? Even more interesting than their track record of brilliant marketing campaigns is their remarkable company culture. You might know their Nike Ekins, but there’s even more to this extremely committed sports and lifestyle brand.

It isn’t always easy to translate Nike’s heritage and marketing tradition into compelling digital concepts and campaigns. Over the years I’ve worked on campaigns in Scandinavia, Belgium and The Netherlands, mostly during my time at Boondoggle Amsterdam.

As early as 2007, I worked with the Nike EMEA team in Hilversum to explore the possibilities of social media for the brand. During my time at Boondoggle Amsterdam and Boondoggle Leuven, and, earlier, as a independent consultant, I was involved in several campaigns and explorations: 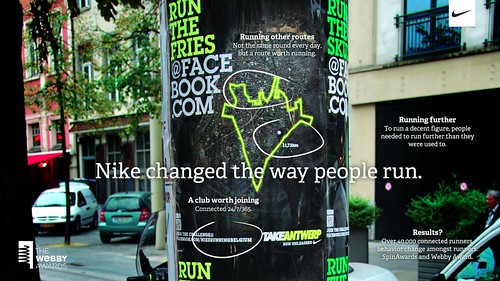 This campaign had to make running less serious. How better way than distracting youngsters from boring running schedules and challenging them to release their creativity on Amsterdam by using their feet as paint instead? We developed a Facebook app that allowed you to make digital graffiti’s on the map of Amsterdam: a running route new style. By actually running the route and uploading your KMs with Nike+ you could paint your graffiti. At Facebook the graffiti’s where created, shared and liked fanatically. Besides this we created an actual runhouse within spitting distance of Amsterdam most famous urban park. Here we hosted all kinds of events and crazy runs for our members. We used guerilla posters all over town to get attention. The result? Young Amsterdam starting running and Nike’s mission to change running was actually experienced by youngsters.

How do we get NikeiD a brand worth talking about in Denmark? By creating a competition worth participating. And involve’s Denmark’s brightest football star along the way. The campaign was fully integrated in Facebook and asked youngsters to design the new Nike Mercurial Vapor boot for Arsenal’s top shot Nicklas Bendtner. Through Facebook they could ask their peers to vote for their design.

Nike Be Me: Challenge Wesley Sneijder

In this campaign Wesley Sneijder challenged young football players to prove they could fit in his shoes. Sneijder is know for his attitude, but also for his enormous talent. Was that the same for the youngsters? Are they worth their attitude? Or were they all talk and no walk? So, Sneijder actually tested youngsters on a few of his football skills.

17,903 youngsters joined the challenge. That’s 45% of the target group in the Netherlands. They spend over 30 hours in the challenge to succeed.