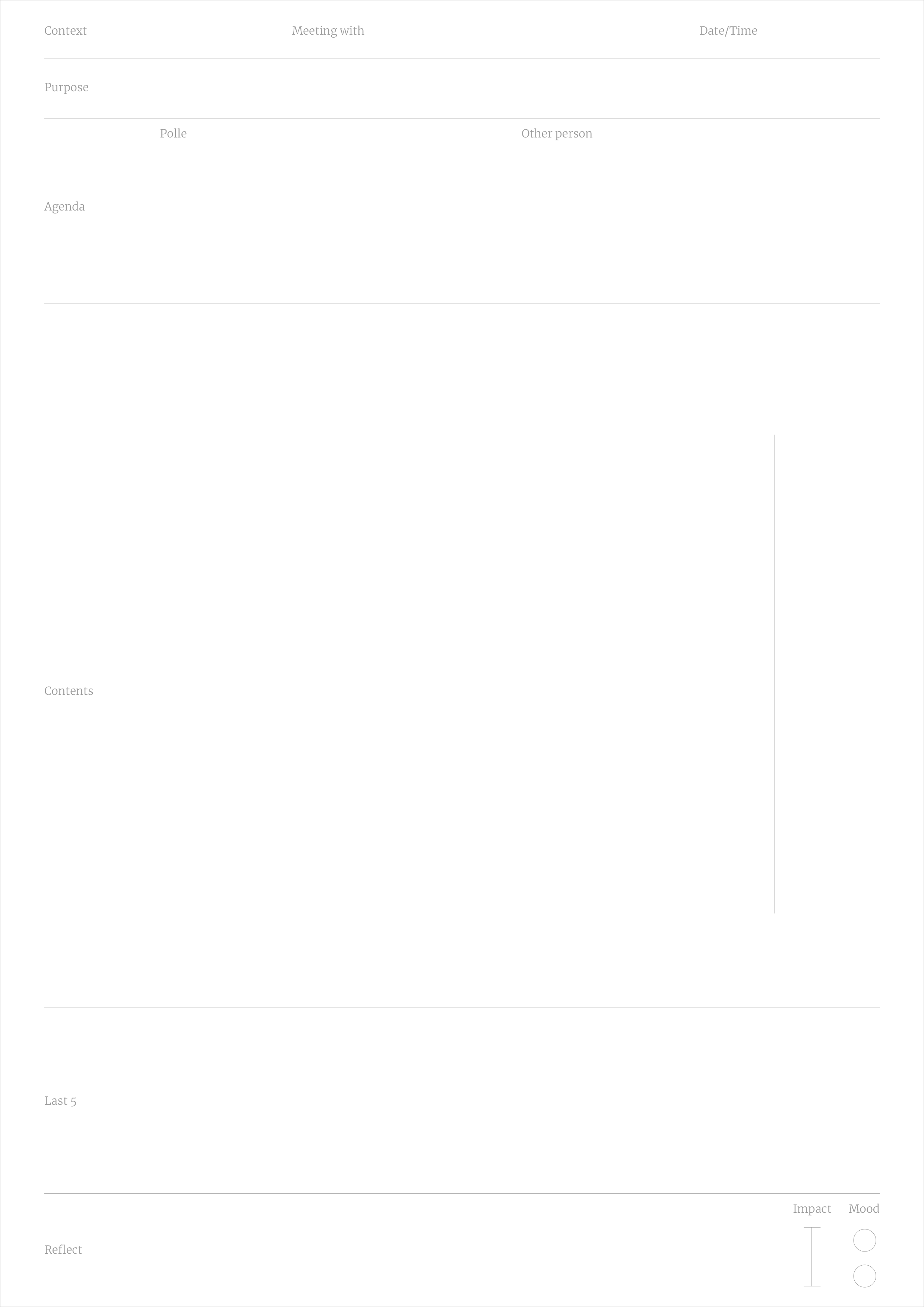 We’re spending more than 2 years of our lives in meetings and a large part of that in 1:1 meetings. So, I decided to draft a 1:1 meeting template that helps me bring structure to my 1:1 meetings and make sure I get the most out of them. Most notably, getting clear what the agenda of the meeting is, spending time on the last 5 minutes of the meeting and reflecting after the meeting (I wrote a separate post on that).Meeting designOffering a basic structure to get the most out of your 1:1 meetings.I use the template as a ‘background’ for my favorite note-taking app on my iPad, Notability, but you could very well draft it in your notebook, print it or use it in any other form. I created 6 distinct “blocks”:Pretty straightforward: who am I meeting with, when/where and what is the context of the meeting (specific project, recurring 1:1).This forces me to think about the purpose of the meeting: why are we having this meeting. This makes me reflect on both the question if this meeting was necessary and/or if the meeting purpose was met at the end of the session.The agenda will force me before the meeting to think about the elements I want to discuss. It also allows me to add agenda points that were added by others. After the first moments of small talk, I tend to align the agenda with the other person, so we’re sure to cover all elements during the meeting.This is just simply where I take notes of the meeting. Things that struck and/or that I need to be reminded of. If you look closely, you will see I use a separate part on the right. I tend to use that to scribble down things I thought of during the meeting that were not directly related to the meeting but were triggered by the discussion. For example, when someone is talking about his/her manager and it reminds me that I have to discuss something with my manager. And/or completely unrelated things – that someone is talking about making a list and it reminds me that I have to buy a new power bank to be ready for my Greenland Arctic Circle Trail hike. Having a separate part on the right makes sure I don’t mix meeting elements with these other thoughts that were triggered.The mere presence of ‘last 5’ on the template helps me being conscious of time. I hate being late for meetings, so being aware of the fact that the last part of every meeting should be spend to check if the purpose was met, if the agenda was covered and what the key outtakes are, so that you will be able to wrap up in time and move on to the next meeting or task is really important. So that is pretty much exactly what I use ‘last 5’ for. Acknowledging the fact that we’re in the last 5 minutes of the meeting, often saying that to the other person in the meeting, checking with both of us that we achieved the purpose, checking with both of us that we covered all agenda items (or quickly have to discuss items and/or move them to a next meeting) and finally, agreeing on the next steps: what exactly did we agree on and what are the action points for both of us.To remind me to reflect on my meeting and to make meeting reflections after the meeting easier, I have reserved the bottom part to reflect on my meeting. I wrote a separate post on reflecting on meetings, so won’t go into detail there, but reflection makes sure I have my key todos/actions straight and that I learn from each meeting. Both “impact” and “mood” have been two things I have been experimenting with recently and require me to indicate the effectiveness of the meeting (did it meet my expectations, did we get something done) and the mood of both me and others in the meeting. It is to early for me to conclude things based on these indicators, but they help me give another dimension to the meeting reflection.