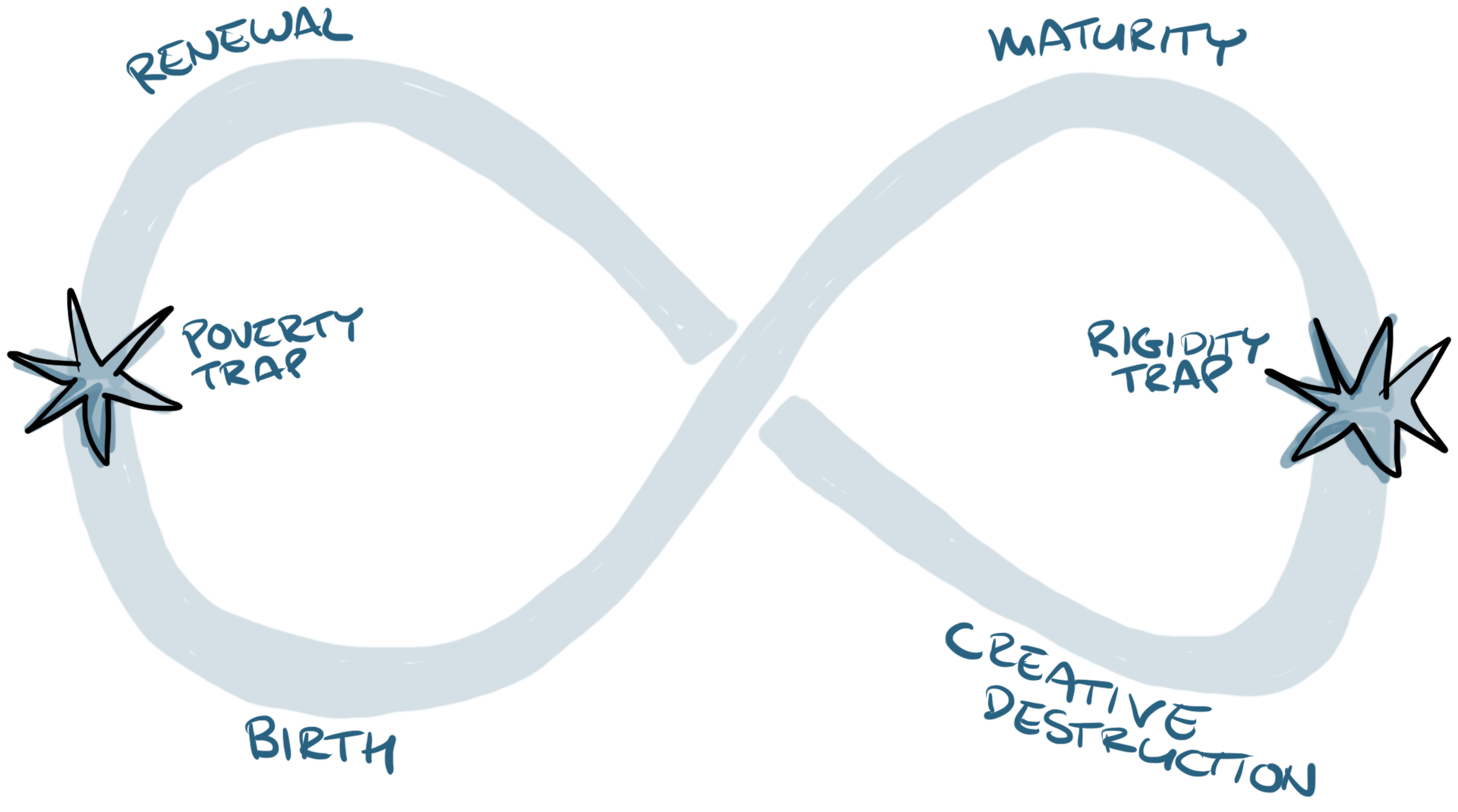 The Ecocycle and the related exercise of Ecocycle planning by Liberating Structures are probably amongst my favorites. The ecocycle eliminates or mitigates common bottlenecks that stifle performance by sifting through your own or your group’s portfolio of activities, identifying which elements are starving for resources and which ones are rigid and hampering progress. The Ecocycle makes it possible to sift, prioritize, and plan actions with everyone involved in the activities at the same time, as opposed to the conventional way of doing it behind closed doors with a small group of people. Additionally, the Ecocycle helps everyone see the forest AND the trees—they see where their activities fit in the larger context with others.

That makes the Ecocycle a very versatile model. I often use it in teams to see what projects need priority, but I also use it in setting my own goals and priorities, defining what elements of my life could use some more attention.Grow your self, Grow your teamThe maturity of the different projects you are working on and what projects/elements need more attention.Liberating StructuresThe Ecocycle consistent of 6 phases, of which 4 ‘normal’ phases and 2 ‘traps’ – phases in the cycle where your project or activity needs more attention to keep it moving, evolving and improving.

This is the phase for new ideas. The creative bubbling feeling of excitement with new projects, initiatives and ideas. The ‘wouldn’t it be awesome if …’ stage, where an idea still needs massive love and attention before it is being put into practice.The poverty trap is for new projects that have formed in your head(s) but need love and attention to get them out of the idea phase into something substantial.The start of the project. The initial steps where the idea has been put into a project. There are still many flaws and uncertainities in the project, but slowly and steadily, it is getting better and better on its way to maturity.Maturity is the phase where projects and actions have reached a full grown state. All errors and flaws are removed and you have maximum benefits from the project or action. There might be some fear for the project becoming ‘rigid’, that things become too ‘mature’ or standardised, but for now, the project runs at maximal impact.The rigidity trap is for projects and actions that have become so mature that they go into auto-pilot and should need some freshing up to make them even better.Creative destruction is for the projects and actions that are beyond the maturity and rigidity trap phases and need to be creatively destructed to make place for something new and better.After mapping on the ecocycle, time comes to define the actions to keep projects and actions moving through the cycle. I have described that in the page describing the Ecocycle planning in the toolbox category. What I also tend to do myself is keeping a checklist of how I like to move projects from every phase to the other phase, but that is something for another post :)✔️92% satisfaction score ✔️50+ countries

In November 2015, I almost died of a kidney rupture and a lung infection. It was an experience that changed my outlook on life profoundly.  It was time to spend my time more wisely. First of all, I decided to make as many beautiful memories as possible. Secondly, I decided to not accept the horrible status quo of suboptimal relationships between companies and people anymore. Not as a consumer myself and certainly not as a professional. I started doing less meetings and more doings. Less powerpoints, more doing stuff. And even more than before, I obsessed about changing companies to be less about ads and more about acts – for both their customers and their colleagues. Impact is about doing. Start doing more.

If you think I can help, I’d love to hear from you.