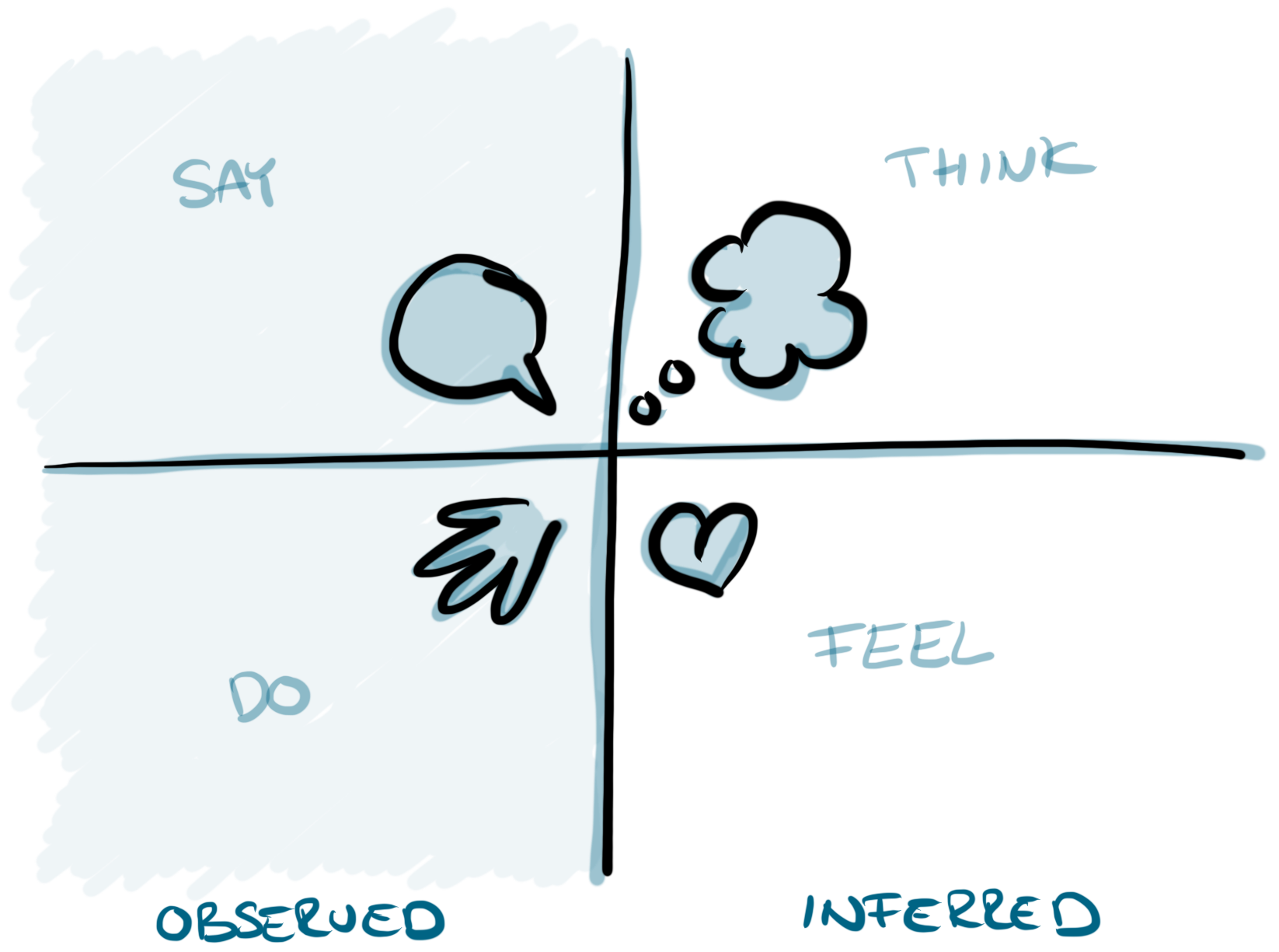 The Simple Empathy Map (pretty much like the “normal” Empathy Map) allows you to quickly sum up and categorize learnings from user research. The map provides four major areas in which to focus our attention on, thus providing an overview of a person’s experience. Empathy maps are also great as a background for the construction of the personas that you would often want to create later.

What did the user SAY? This represents what the user says out loud in an interview or some other usability study. Ideally, it contains verbatim and direct quotes from research, like: What did the user DO? Describe which actions and behaviors you noticed: what does the user physically do? How does the user go about doing it? It might help to add drawings or pictures here. What did the user THINK? Try to dig deeper beyond what you merely observed. Ask yourself (from the qualitative research gathered): what occupies the user’s thoughts? What matters to the user? What do you think that your user might be thinking? What are their motivations, their goals, their needs, their desires? It is possible to have the same content in both Says and Thinks. However, pay special attention to what users think, but may not be willing to say out aloud. Try to understand why they are reluctant to share — are they unsure, self-conscious, polite, or afraid to tell others something? How did the user FEEL? This part of the quadrant refers to the user’s emotional state, often represented as an adjective plus a short sentence for context. Ask yourself: what worries the user? What does the user get excited about? How does the user feel about the experience? Take subtle cues like body language and their choice of words and tone of voice into account. The Empathy Map will help to distill user needs which -in turn- will help you tackle the customer challenge. Needs are verbs, i.e. activities and desires. Needs are not nouns (the name of some specific thing or set of things, such as living creatures, objects, places, actions, qualities, states of existence, or ideas), which will instead lead you to define solutions.

Try to identify needs directly from the user traits you noted. Identify needs based on contradictions between two traits, such as a disconnection between what a user says and what the user does. There are multiple ways to do so, of which Maslow’s Pyramid or Pinto’s Pyramid can help you define which needs your user is primarily focused on fulfilling. Start reflecting on how your product or service can help fulfill some of those needs.

When you have needs, you can make the step towards insights, remarkable realizations that can help you to solve the current design challenge you’re facing. This in contrast -obviously- to unremarkable realizations – read my post on banned insights for that. In order to do that, look to synthesize major insights, especially from contradictions between two user attributes. It can be found within one quadrant or in two different quadrants. You can also synthesize insights by asking yourself: “Why?” when you notice strange, tense, or surprising behavior.