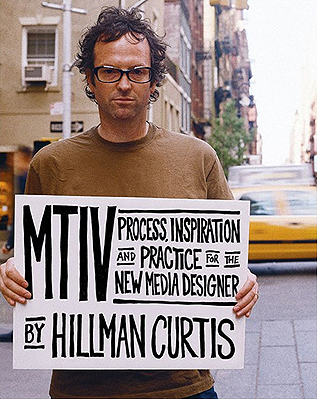 In 2002, I visited New York for the first time. I only just turned 19 and was still under the impression that I could become the best webdesigner in the world.

So I decided to meet him.

I bought his latest book (Making The Invisible Visible – see image), found out where his office was and gathered all the guts I had. Nervous as hell, I sneaked through security with some people that worked in the same building.
I took the elevator to the fifth floor where he had his office.
I had prepared to convince the receptionist with some tear-jerking story to get 5 minutes with the master himself.
But I hadn’t prepared for stepping out of the elevator, directly into the center of a huge loft where Hillman was playing with his kid. He must have been as surprised as I was, but stopped playing with his kid, came up to me, overheard me stumbling about how I loved his designs and shook my hand, thanked me for coming over and spent the next 20 minutes walking me through his latest designs and signing my book.

I know, it sounds stalker-ish, creepy, freaky and pretty uncomfortable but hey, I was young.
And it made me feel like the luckiest kid in the world.

From then, I promised myself that I would do my utmost best to help every student or young colleague that reached out for advice or help. If THE Hillman Curtis could free 20 minutes for some random young Engrish-speaking Dutchman, I would never have any excuse that could prevent me from doing the same.

Mister Curtis passed away last week after a long and fiercely fought battle with colon cancer.
Thank you so much, Hillman, for 20 of the best minutes in my life and this extremely important lesson.

UUncategorized
Last week, I announced (check mailing) leaving advertising agency Boondoggle for research/consultant firm InSites Consulting. Yep, I was…
HHabits
“Ok, now it’s enough, we’re going to the hospital”. My wife had been putting up with me complaining…
TThoughts
I am not the person that hates TV. Or TV shows. Or thinks that reading is better than…
BBest practices
Last summer, my girlfriend and I went for a short break to Italy. We travelled different cities and…
TThoughts
Since last week, my family is the proud owner of an Amazon Echo. And we’re extremely happy with that…
UUncategorized
I’m not planning to pass away anytime soon. Still, I spent some time weekend securing my ‘virtual will’.…
This website uses cookies to improve your experience. We'll assume you're ok with this, but you can opt-out if you wish. Cookie settings ACCEPT
Privacy & Cookies Policy