The CIA guide to sabotaging companies

Ever been in a meeting where it seemed it was designed to suck all life out of the attendants? Ever met a manager or a colleague that seemed to work against the company interest? It might very well be that it is for exactly that reason – because it was -at least once- considered to be a way to sabotage a company.

I often use it as a reminder in my presentations on how flawed organisations often are, how we can design better meetings and gettogethers and how we can better spend our time.

”When possible, refer all matters to committees, for “further study and consideration.” Attempt to make the committee as large as possible.

It was the end of the Second World War in 1944, when the United States Office of Strategic Services released it’s Simple Sabotage Field Manual, a guide how to sabotage the occupying forces in occupied Europe. It was distributed as a secret pamphlet that was intended as a guidebook to citizens living in Axis nations who were sympathetic to the Allies.

The Office of Strategic Services

The Office of Strategic Services (OSS) was a wartime intelligence agency of the United States during World War II, and a predecessor to the Central Intelligence Agency (CIA).

The “Simple Sabotage Field Manual,” declassified in 2008 and available on the CIA’s website, provided instructions for how everyday people could help the Allies weaken their country by reducing production in factories, offices, and transportation lines. As the CIA now states on their website “Some of the instructions seem outdated; others remain surprisingly relevant” and “Together they are a reminder of how easily productivity and order can be undermined”.

”When possible, refer all matters to committees, for “further study and consideration.” Attempt to make the committee as large as possible.

How to sabotage organisations and conferences

How to sabotage companies as a manager

How to sabotage companies as an employee

If the Office of Strategic Services, if the CIA considers it a succesfull way to sabotage companies or colleagues … maybe we should just stop doing it. 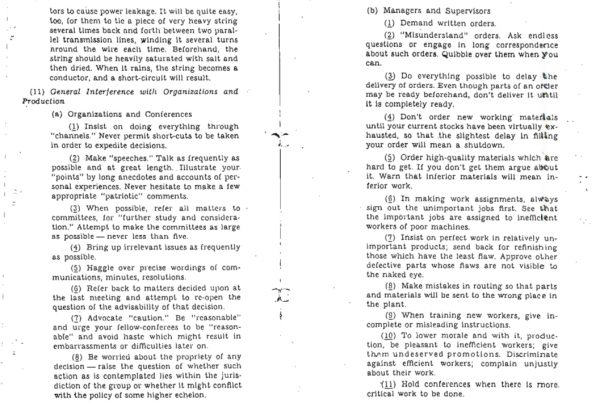 Foursquare’s brand book, a missed opportunity to prove they’re all about making the real world easier to use