McDonald’s house rules (or: be careful what you ask for)

Earlier, I wrote about how 2% of your customers who steal, cheat and misbehave force you to decide how you treat the remaining 98% of your customers. Several weeks later, I went to McDonald’s in Amsterdam to grab a BigMac. I bumped into their house rules, another illustration of my point. 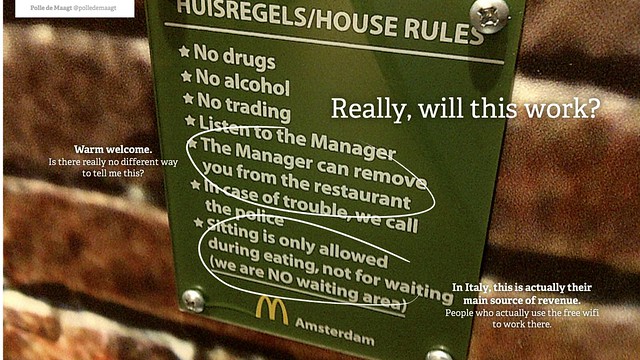 When I sat down to eat my daily dose of saturated fat while killing some emails and tasks, I noticed their house rules.

No drugs. No alcohol. No trading. Listen to the Manager. The Manager can remove you from the restaurant. In case of trouble, we call the police. Sitting is only allowed during eating, not for waiting (we are NO waiting area).

That instantly killed any positive feeling I might have had.
These house rules did not make me feel any safer.
These rules did not increase my sympathy for or trust in the manager.
These rules were in no way coherent with their TV ads or social media presence.
Above all, it made me (as a flexworker waiting for his next appointment) feel extremely unwelcome (while flexworking wifi-seekers are one of the main drivers of McDonald’s traffic in -for instance- Italy).

And maybe the worst thing: I can not imagine that these rules will deter a single person from acting against the house rules. In contrast, even the mini-rebel inside of me almost felt the urge to act against the rules.

Sometimes, the best way to reach your goal is not the direct way, but a nudge, a wink, a small intervention to influence people’s behavior for the better without directly telling them. There might actually be a better alternative than these (passive?) aggressive house rules. A good start would be having a look at Bagels & Beans’ remarkable house rules.
Yep, nudges. I’m lovin’ it.

BBlogposts
I love 37signals and their work. I love their philosophy and I strongly admire many of their employees,…
WWorst practices
In a few weeks I will spend a long weekend in Dublin, relaxing with friends and visiting my…
PPersonalisation
Advertenties tonen op basis van het profiel van de gebruiker is begrijpelijkerwijs met een sterke groei bezig. Hoe…
BBlogposts
I love Foursquare‘s purpose “make the real world easier to use”. It’s a plea and commitment to use…
BBlogposts
There aren’t many brands I spend more time with than the Belgian and Dutch railways (NMBS and NS).…
BBlogposts
Update: A Microsoft employee contacted me this morning (september 5th) and forwarded the issue to the appropriate team.…
This website uses cookies to improve your experience. We'll assume you're ok with this, but you can opt-out if you wish. Cookie settings ACCEPT
Privacy & Cookies Policy