People cooler than you 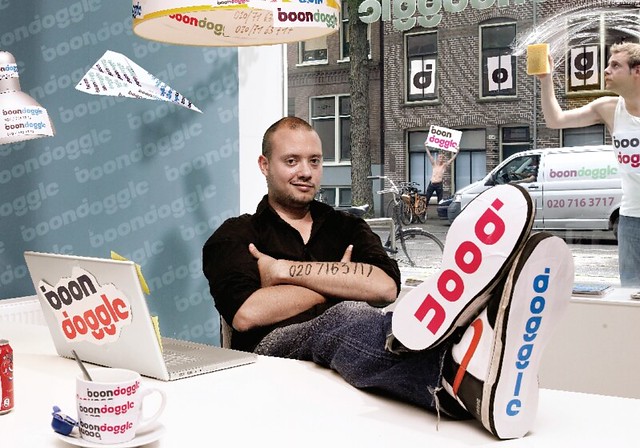 Why cooler than you? Did more kickass advertising work before 30 than you.
Occupation: Managing partner / creative director at Boondoggle Amsterdam
Remarkable fact: Used a copier to duplicatie money and become a “milionaire” when he was six. Big fan of Arnold Schwarzenegger.
Proof: Find it at his twitter account @gastonserpenti, his Pumpcast, his portfolio and the website of his agency Boondoggle.

He might be a pain in the ass, but make it the smartest, most amibitious, most creative pain you ever encountered.

Gaston is one of the creative geniusses behind some pretty epic Rabobank, KLM and Nike campaigns. When he’s not claiming pretty much every Foursquare mayorship of pretty much every bar in Amsterdam, he mixes the monthly Le Pumpclub Pumpcast.

No creative. No strategist. Just a remarkable creator of stuff worth sharing, bound to achieve world domination. Outperformer.

Or, as Carlos Furnari, copywriter, ex-Wieden+Kennedy would say:

Gaston is a Global Thinker over-achieving on the Local Market Stage. An eye and gut for creativity, supported by a well-endowed head for business. Hands on leader who will not put your coffee cup in the dishwasher for you but will show you how to turn it on. Relationship gardener. Communications crafter. Unconventional path-galloper. Digital believer. Really, really, annoyingly nice guy. Really.

Note: I worked for almost 18 months with Gaston at Amsterdam-based advertising agency Boondoggle.