Some cases don’t have the highest impact or return in cash, but are still very interesting from multiple perspectives. Welzijnszorg’s Rijke Verhalen (Rich Stories) is one of these cases. Smart conversion thinking and pioneering the use of technology in an extremely simple but efficient way. 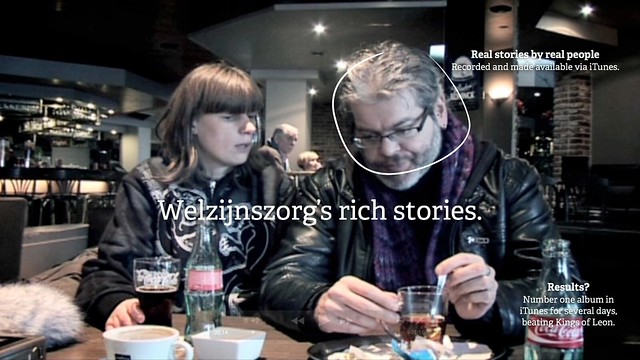 Last year, Welzijnszorg and ad agency Famous Brussels teamed up to put a spotlight on the hidden poverty in Belgium. They recorded nine true and authentic stories from people who lived in poverty. About taking a calculator to the supermarket. About cutting tires just to stay warm. About surviving with water and a bit of sugar for three days. All real stories from real people. And these stories were made into an iTunes album.

The iTunes album featured all nine stories and was available in the Belgian iTunes music store. People could listen to a preview of the story (as is normal in iTunes) and could buy one of the stories (or the complete album) and directly support Welzijnszorg.

Some things I love about the campaign:

Well, see for yourself …

Results? Quite some coverage on social media and in mainstream press. The album was in the top of iTunes sales in Belgium for several weeks (beating Kings of Leon, amongst others). However, revenue from iTunes sales was less than hoped for (but still not bad for a low budget campaign like this).

BBlogposts
Consumers are lazy. And that’s pretty much the business case behind Zappos’ 365 day return policy. The return…
BBest practices
Making a ‘funny movie’ when your CEO is leaving is wrong in so many ways. You can imagine…
BBest practices
Case Kimpton CEO’s phone number for elite members I travel a lot (I even have a special blog about…
BBest practices
Happy team makes happy customers. Give people an opportunity to act and they will.It is difficult for people…
BBest practices
Last summer, my girlfriend and I went for a short break to Italy. We travelled different cities and…
UUncategorized
Almost a year ago, I decided to move to Belgium to live with the love of my life,…
This website uses cookies to improve your experience. We'll assume you're ok with this, but you can opt-out if you wish. Cookie settings ACCEPT
Privacy & Cookies Policy