Recently, I have been updating the tools I often use in workshops (either remote or live) and brainstorms on my site. One of the tools I have been adding is “the secret ice cream“, a tool I started using after I met Smashing Magazine’s Vitaly Friedman in Bulgaria a few years ago. A tool I named after the ice cream principle – and that allows for some explanation. 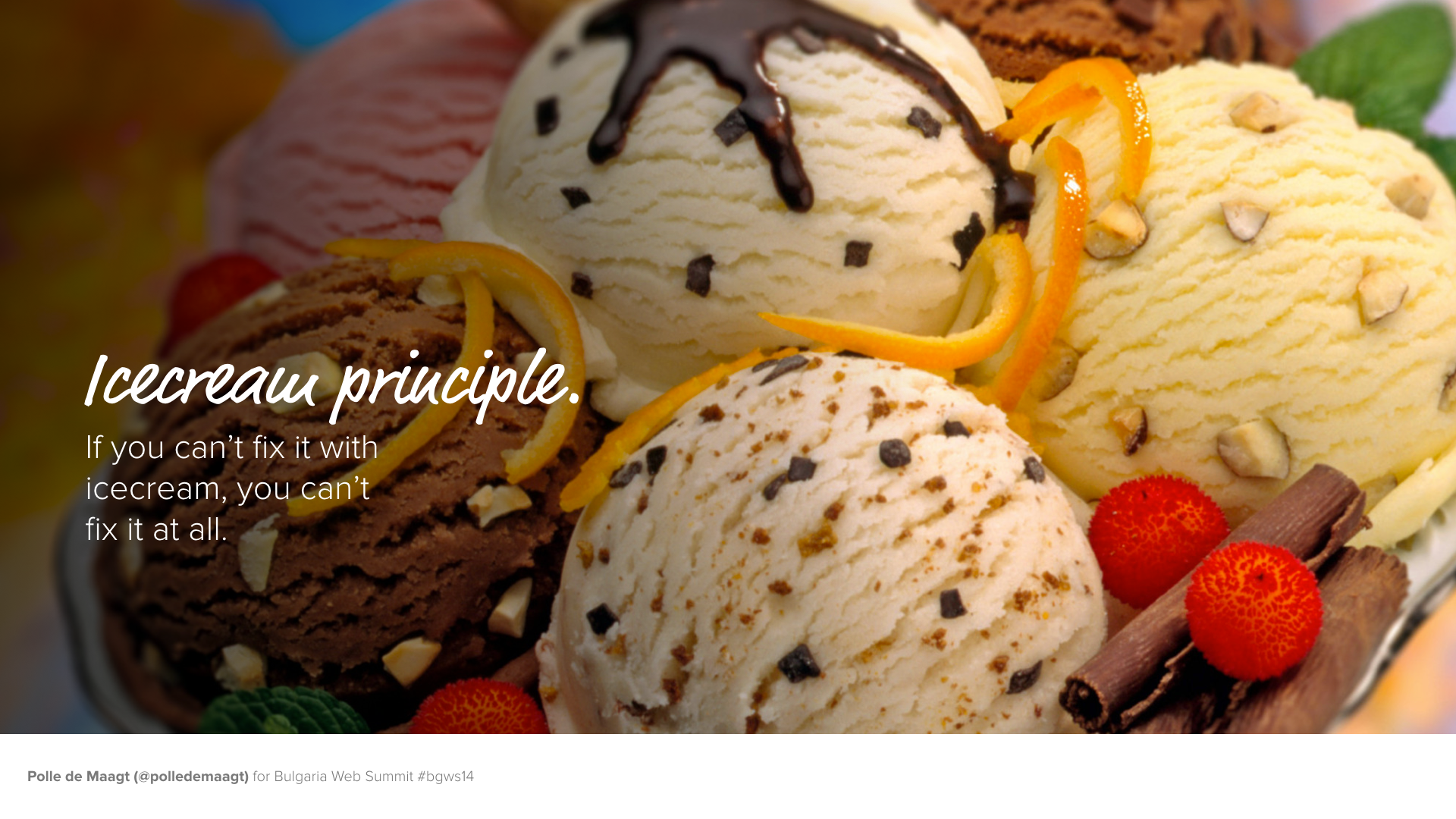 The ice cream principle referred to a made-up principle with real-life truthiness in it: If you can’t fix it with ice cream, you can’t fix it at all. It refers to the situation where you screwed up as a person or organization and have to make things right. In these cases, it is not about the monetary value of what you offer to make it right, it is about the empathy, warmth and personal feel you put into it. Even more, there was research I worked on where if the monetary value of the compensation was too big, people would actually feel ‘bought’ and would be more unhappy.

So if you can not fix it with something the cost of an icecream, you probably won’t be able to fix it at all.

How the ice cream principle came to be

As I said, I had met Vitaly in Sofia, Bulgaria, at a web event. We had been both traveling from conference to conference and were a bit tired. When we had a drink the evening before the conference, we decided to battle fatigue by giving each other a creative challenge: each of us would work the word ‘ice cream’ into our presentation without the audience noticing it. If people would notice that ice cream shouldn’t be part of the presentation, we lost. The person who would be able to work it in the most seamlessly would win (I turned it into “the secret ice cream” later).

A few years later, we would have a similar exercise amongst speakers at Insites Consulting. At our internal events, each speaker would get a list of words he or she would have to work into the storyline within the hour before going on stage. A great way to challenge people’s creativity and speaking skills.

When updating the tool on my website, I stumbled upon ‘another’ ice cream principle as Sol Horowitz, a brand and design strategist, has another phenomenon he refers to as the “ice cream principle”: “Nothing ruins creativity like too many voices weighing in. We call it the Ice Cream Principle. Tell 10 people to go get ice cream with one condition: they all have to agree on one flavor. That flavor is going to be chocolate or vanilla every time. Groups of people don’t agree on what’s cool or interesting, they agree on what’s easy to agree on. Don’t pick a name strictly because it’s a top vote-getter.”

Whatever the explanation – ice cream principle as a reminder of empathy or ice cream as a reminder that nothing ruins creativity like too many voices weighing in – remember the Ice Cream Principle. And use the Secret Ice Cream as a tool to spice op your meetings 🙂