The story of Johnny the Bagger

It must be the worst case movie ever, but it still seems a remarkable story. A grocery store bagger named Johnny, who has Down Syndrome – took it upon himself to find a new way to reach out to customers, and completely revolutionized a store. 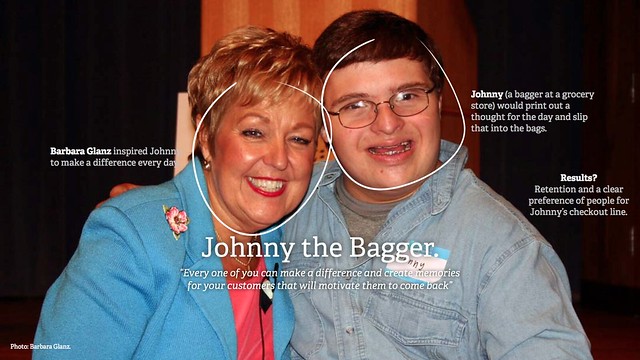 The story begins with employee-motivation expert Barbara Glanz. She claims in her own video that she spoke to an audience of 3,000 employees of a major grocery chain, some years ago. She told the crowd, “Every one of you can make a difference and create memories for your customers that will motivate them to come back”. So far, nothing new.

One bagger with Down Syndrome, Johnny, contacted her later to say he had thought about her advice, and came up with a plan to create those memories. Each day when he got home from work he would type and print out a thought for the day on the family’s home computer. Then, the next day, as he bagged groceries, he’d put a slip with his thought (signed with his name) into the bag.

The response was astonishing. Customers reported they had switched to shopping the store more often, as they didn’t want to miss any of Johnny’s thoughts. Soon his checkout line ran the length of the store, full of customers who refused to switch to shorter lines. Only Johnny’s line would give them the thought for the day.

Note: It must be true, right? Who would misuse a Down-syndrome patient to build a story? And even, if it isn’t true; makes you think.

BBest practices
In hospitality, where much is the same, the difference made in small service gestures. Find small interventions that…
nnudge
Recently, I stumbled upon a recent feature of document sharing platform Scribd: pay in content. As an alternative…
nnudge
The concept of nudge is the ultimate ‘acts not ads‘. Not telling what people should do, but using…
BBlogposts
A brand definition for a dog food brand. It defines a purpose for the brand, a tone-of-voice, a…
BBlogposts
Tonight, I will be staying at the Hotel Saint Sauveur with my girlfriend, her sister and family to…
BBest practices
Find conventions, break them. Reap the benefits.Terms and conditions are boring. Always. Let’s un-bore terms and conditions.Terms and…
This website uses cookies to improve your experience. We'll assume you're ok with this, but you can opt-out if you wish. Cookie settings ACCEPT
Privacy & Cookies Policy