There is nothing wrong with paying for media. All brands should have a healthy balance between paid, owned and earned media.
Paying for media might help you get more reach for your conversation-worthy acts. It even might help you get a presence in online places where it’s difficult to ‘earn’ media. And honestly, there’s hardly any thing like a ‘viral campaign’. The tipping point to get a ‘viral’ campaign is often reached by bannering or seeding influentials.

So, whenever you’re paying for media, for banners, shouldn’t you get the most out of it?

The success of banners is mostly measured in clicks or views.
In click through, leads generated and funnels completed.
In the number of views they get.

Where there’s much buzz about new bannering formats, retargetting, more relevance …
Shouldn’t we add: the volume and sentiment of conversations they generate?

To use even more of a banner’s unused potential, some potential questions to ask:

How is this banner conversation-worthy? 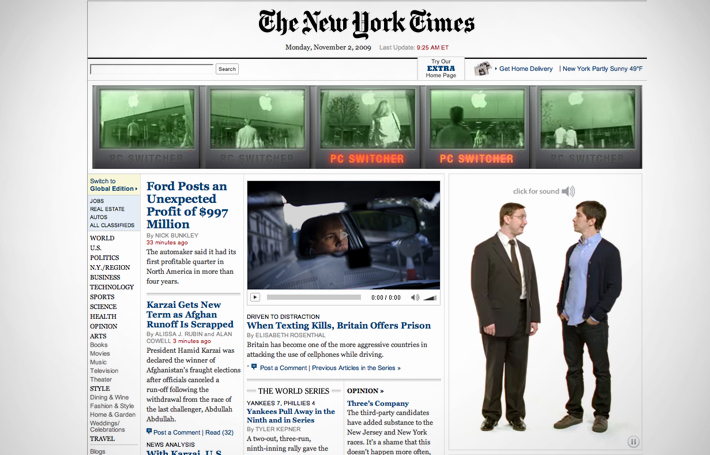 In what was is this banner worth sharing or talking about? Can we make sure that the content, the topic or copy of the banner will actually generate online conversations. Example: Axion’s Banner Concerts, the Apple talking banners on NYtimes.com.

How can this banner directly lead to conversations?

Can we add sharing buttons, twitter/facebook integration to directly tap into conversations? Example: Dollhouse tweet in a banner (yes, horrible example, but you get the idea).

How can the context of this banner stimulate conversations?

Bannering within a relevant context, that enables conversations (e.g. a recipe site when you’re a food company, a finance blog when you’re providing financial services) will make it possible for consumers to directly talk about the banner. In other words: make sure you use banners in places where it’s easy to have additional and relevant discussions about the banner and it’s message.

Other ideas to use the unused potential of banners in conversations?

UUncategorized
It’s interesting to see how marketing campaigns are changing: Marketing is more about acts, not ads. It isn’t…
BBest practices
Last summer, my girlfriend and I went for a short break to Italy. We travelled different cities and…
HHabits
“Ok, now it’s enough, we’re going to the hospital”. My wife had been putting up with me complaining…
UUncategorized
I’m not planning to pass away anytime soon. Still, I spent some time weekend securing my ‘virtual will’.…
TThoughts
I am not the person that hates TV. Or TV shows. Or thinks that reading is better than…
UUncategorized
Last week, I announced (check mailing) leaving advertising agency Boondoggle for research/consultant firm InSites Consulting. Yep, I was…
This website uses cookies to improve your experience. We'll assume you're ok with this, but you can opt-out if you wish. Cookie settings ACCEPT
Privacy & Cookies Policy