Leasing and buying virtual stuff is for losers. Or is it?

Some laugh at gamers who buy virtual swords, houses and other swag. And maybe they’re right. How foolish to spend money on something that doesn’t exist in real life. But in the meanwhile, buying virtual and even leasing virtual goods is rapidly becoming mainstream. What’s next? 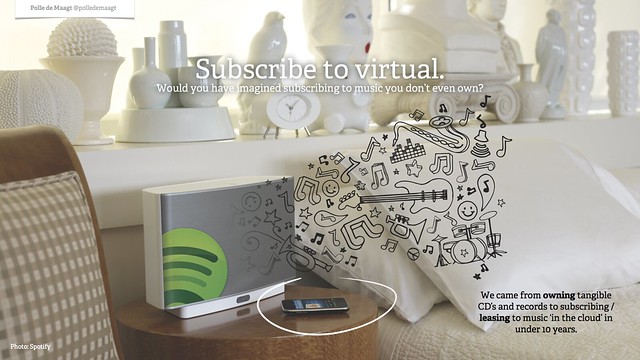 Ten years ago, when you wanted music, you would have bought a CD or a record. With some luck, you were one of the 26.4 million users of Napster “stealing” music to save it on your harddisk. Slowly, over the years, we have learned to accept virtual, pay for virtual and now even lease virtual.

Let’s take the music industry as an example. Records became digitized CD’s. CD’s turned bits and bytes via Napster and Kazaa. iTunes taught us to pay for virtual records again. And Spotify now turns leasing music mainstream. Already 2,5 million users pay for the right to lease unlimited amounts of music. They can’t hold it. They don’t own it. And when they stop paying their monthly fee, they don’t have access to the music.
Virtual music. Subscribing to and leasing virtual music.

And we get a kick out of virtual points and credits (e.g. Foursquare and all other over-badgified stuff), we buy more and

So think, next time you make fun of people buying virtual goods. You might be next. Earlier than you think.

UUncategorized
It’s interesting to see how marketing campaigns are changing: Marketing is more about acts, not ads. It isn’t…
UUncategorized
I’m not planning to pass away anytime soon. Still, I spent some time weekend securing my ‘virtual will’.…
UUncategorized
Almost a year ago, I decided to move to Belgium to live with the love of my life,…
HHabits
“Ok, now it’s enough, we’re going to the hospital”. My wife had been putting up with me complaining…
UUncategorized
Last week, I announced (check mailing) leaving advertising agency Boondoggle for research/consultant firm InSites Consulting. Yep, I was…
TThoughts
I am not the person that hates TV. Or TV shows. Or thinks that reading is better than…
This website uses cookies to improve your experience. We'll assume you're ok with this, but you can opt-out if you wish. Cookie settings ACCEPT
Privacy & Cookies Policy