Being conversation-worthy on every brand level

Over the last couple of months, we’ve worked hard to implement conversation-thinking in several companies, ranging from Unilever to Telenet and KLM to Puratos. Some takeaways:

We have translated our learnings into a first draft of our model for being conversation-worthy on every brand level. Let me know what you think. 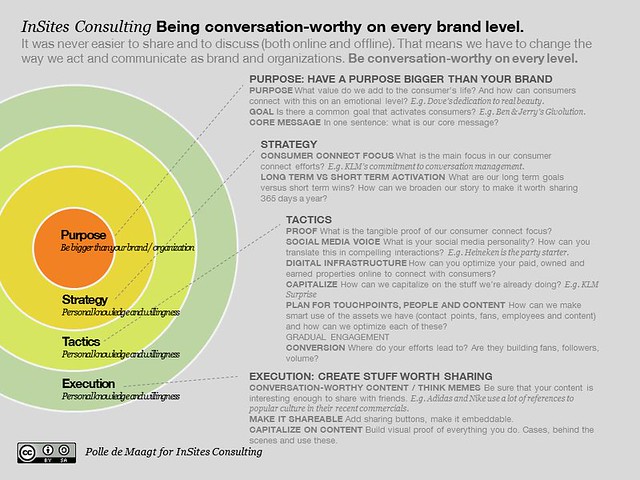 MModels & Frameworks
So, what will social media do for my sales? Some hardcore sales people will approach social media merely…
BBlogposts
I talked about gradual engagement before and especially how Facebook forces gradual engagement. Where in Facebook, engagement is…
MModels & Frameworks
How to engage in conversations? How are we managing consumer expectations as soon as we’re start answering questions…
BBlogposts
Many recent brand efforts are designed to end up in user streams, whether on Facebook, Twitter or any…
BBlogposts
Much is said about random acts of kindness. The concept of random acts of kindness as most people…
MModels & Frameworks
So, you crafted a fancy consumer connect strategy. You have a great plan to make every company touchpoint…
This website uses cookies to improve your experience. We'll assume you're ok with this, but you can opt-out if you wish. Cookie settings ACCEPT
Privacy & Cookies Policy