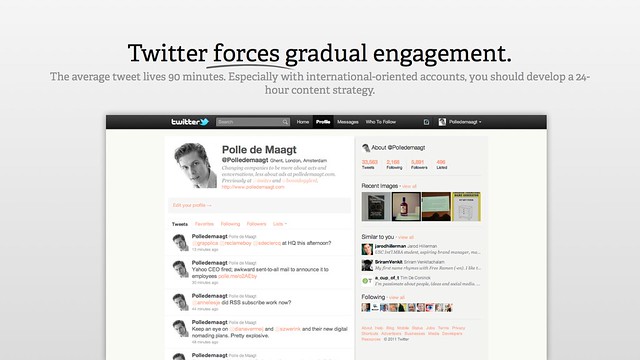 Tweets (even more than Facebook status updates) have an extremely short life.
They quickly drown in the sheer amount of tweets people produce. Most tweets only live for an hour. An analysis by Sysomos of 1.2 billion tweets in 2010 showed that 29% of tweets get a reaction (which is similar to our own InSites Consulting research that showed that 75% of social media messages comes unanswered). A stunning 92.4% of all retweets happen within the first hour of the original tweet being published, while an additional 1.63% of retweets happen in the second hour, and 0.94% take place in the third hour.

That’s a serious attention challenge. To counter this content decay, there are different approaches:

That, again, shows that merely campaigns (short intensive brand efforts to have high impact and reach) won’t do and that brands need to move towards a more gradual approach and engage consumers throughout the year. That brands have to adopt a conversation management approach that is both reactive and proactive and both service-driven and marketing-driven (more here).

Interested in more about content decay and attentionomics? Check Steve Rubel’s talk on this years The Next Web in Amsterdam (as captured by @wilg).

UUncategorized
It’s interesting to see how marketing campaigns are changing: Marketing is more about acts, not ads. It isn’t…
MModels & Frameworks
So, what will social media do for my sales? Some hardcore sales people will approach social media merely…
MModels & Frameworks
So, you crafted a fancy consumer connect strategy. You have a great plan to make every company touchpoint…
UUncategorized
Almost a year ago, I decided to move to Belgium to live with the love of my life,…
TThoughts
Since last week, my family is the proud owner of an Amazon Echo. And we’re extremely happy with that…
MModels & Frameworks
How to engage in conversations? How are we managing consumer expectations as soon as we’re start answering questions…
This website uses cookies to improve your experience. We'll assume you're ok with this, but you can opt-out if you wish. Cookie settings ACCEPT
Privacy & Cookies Policy