Social sales and proving the value of conversations: conversion attribution

What’s the ROI of social media?

Every time you try to change a company to be less about traditional ads and more about acts and conversations, this mother of all questions pops up. One could argue that doing remarkable things and acting conversation-worthy on every brand level increases Net Promoter Score (and there is a correlation between Net Promoter Score and profit). One could argue that an open company culture builds profit (and could even point to Zappos as an example). But a lot of managers, especially in the early stage of implementing conversations, will discard these arguments as fluffy social media guru and communications speak.

One could argue that collecting ‘likes’ or fans is a great idea (see my ideas on that). Or one could show views, clicks and impressions. But really, does that prove conversations work?

A large part of actually changing a company to be more about conversations and acts is showing the skeptics conversations work. By doing small pilot projects that create proof of concepts and business cases, by sharing best practices. And by showing the value of social media and conversations in actual sales.

Melanie is considering to fly to Brazil, but is not sure whether the ash cloud problems will influence her travel journey. So she goes to an airline facebook fanpage, asks a question and gets an answer from the airline webcare team. She decides she wants to go, turns to google.com and searches for “flight brazil” and buys a ticket via the airliner.

Normally, that would put Melanie +1 in the Google traffic silo. But, almost the complete decision can be attributed to the great airline webcare. 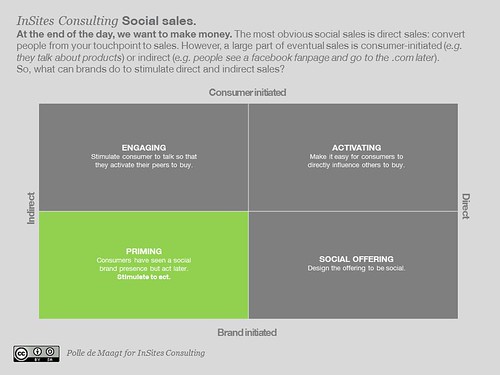 Let’s take a step back. There is a large spectrum of ways to generate social sales:

Let’s say Paul is a fan of Philips and wants to by a Philips TV. He uses google to find some product information. He asks his friends on twitter what they would advise him and clicks the links they share with him. He turns to the Philips TV fanpage to find some extra info and is also triggered by a Philips banner ad he sees on one of the website.

After a brief discussion with his wife, he returns to his computer, types www.philips.com in his browser address bar and buys the product.

Normally, that would put Paul as a +1 in direct traffic silo. But, as you have seen, Paul is influenced by twitter links, product info and the Facebook fanpage. So, actually, it would make sense to atttribute value to these platform when it comes to sales.

So, that’s where conversion attribution comes in. It starts from the idea that every touch point in the consumer journey has a specific value in the final sales action. Therefore, instead of measuring the final click only, it makes more sense to attribute value to the specific channels.

There are different ways to attribute value to the different sources, time on site is one of them. I could imagine that combining that with click behaviour or specific engagement levels helps you build a pretty decent weighing method.

Even more, you could measure the value of all of the four quadrants mentioned above. So: do the people who are serviced by airline webcare buy more than people who enter the site via Google?

In the use cases mentioned above, a lot of consumers will browse sites, facebook, twitter and other platforms to finally make the sale via direct traffic to the site (typing philips.com) or Google. That would normally mean that Google and direct traffic would be valued ‘too high’ while Facebook and other social platforms would be valued ‘too low’. Conversion attribution would solve this problem for the largest part and will help to give a more ‘honest’ representation of how social and conversations help to generate sales. And maybe it even helps to turn some social and conversations skeptics into believers …

Let me know what you think.
Want to get started with conversion attribution? Have a look at this slideshare presentation.