The evolution towards frictionless sharing 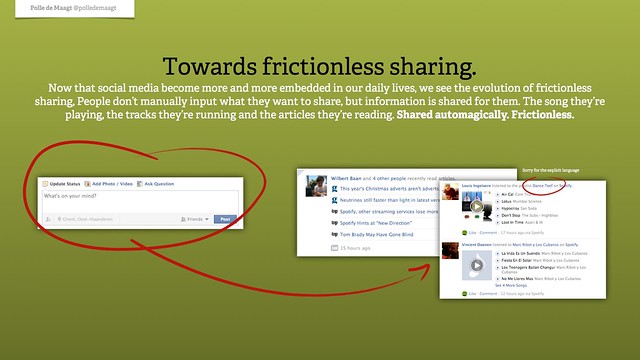 Every song you play in Spotify.
Every article you read on the Washington Post website.
And possibly
Every mile you run with Nike+.
Everything you buy at Wallmart, Delhaize, Jumbo or Albert Heijn.

And we’re in for quite some more. Facebook Beacon might have been a bit too early, but Mark Zuckerberg’s “law of social sharing”, that the amount of data people share doubles every year, seems to hold. More photos, tweets, tumblr posts, videos, check-ins, updates and shares than ever.

Not so long ago (in 2006), Facebook users revolted when the news feed was introduced. Many users felt uncomfortable with the idea that their activity on Facebook (likes, comments) would be broadcast to other Facebook users all the time. But look where we are now. So, regardless of what people say they will do, or how much they criticize features like frictionless sharing from social apps, they will eventually use it. The idea that apps are sharing a continuous stream of our activity will seem just as commonplace and uncontroversial as the original news feed.

HHabits
“Ok, now it’s enough, we’re going to the hospital”. My wife had been putting up with me complaining…
TThoughts
I am not the person that hates TV. Or TV shows. Or thinks that reading is better than…
UUncategorized
Almost a year ago, I decided to move to Belgium to live with the love of my life,…
TThoughts
Since last week, my family is the proud owner of an Amazon Echo. And we’re extremely happy with that…
UUncategorized
I’m not planning to pass away anytime soon. Still, I spent some time weekend securing my ‘virtual will’.…
UUncategorized
Last week, I announced (check mailing) leaving advertising agency Boondoggle for research/consultant firm InSites Consulting. Yep, I was…
This website uses cookies to improve your experience. We'll assume you're ok with this, but you can opt-out if you wish. Cookie settings ACCEPT
Privacy & Cookies Policy