The most important 2% of your customers

Approximately 2% of your customers will rip you off. They will game your system. They will do everything to gain financial win from your pockets. They will lie to you. Cheat on you. Pretend they’re angry. Neglect you. Won’t pay. Complain about you out in the open, just to put you under pressure. They will demand to speak to your boss. Will yell at you and ask you if you know who they are. Well, you get the idea.

I was reminded by this last week when I tried to buy at ticket at the Gent train station. I went to the NMBS ticket machine, selected a train ticket to Brussels and paid by bank card. However, the machine failed to print en went out of order. I had no choice but going to the ticket counter. The service employee there said he couldn’t help me, couldn’t give me my money back and handed me a standard contact form to send to the NMBS headquarters to complain.

The employee was able to see the out-of-order message on the machine from his counter (that would at least strengthen my case), I was wearing a suit (I guess that would make me a more trustworthy person in some people’s minds) and over the last year, I bought tickets with him at least 15 more times (he could have recognized me, there aren’t so many Dutch people buying tickets to Amsterdam every week at 6h00 in the morning). But that all wasn’t enough for him. 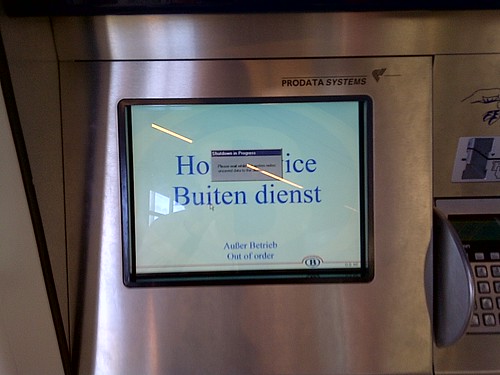 But really, why would I lie to him?

And then I thought about the 2% rule. The 2% of the customers that probably tried to rip the NMBS off and why this employee was not allowed to give me my money back.

It’s not about this 2%. It is about what you do with the other 98%. Too many companies let the 2% of their customer dictate how they service the majority of their customers.
And treating all your customers like possible cheats won’t bring the 2% down; it will actually stimulate the 98% to look for compensation and ways to cheat the system as well.

And it doesn’t have to be this way.

The cheating and lying 2% of your customers are your most important customers. They help to make the difference between companies that act from fear of losing some money on 2% of their customers and the companies that see an opportunity to make a decent profit from the rest of them.

BBest practices
Last summer, my girlfriend and I went for a short break to Italy. We travelled different cities and…
HHabits
“Ok, now it’s enough, we’re going to the hospital”. My wife had been putting up with me complaining…
UUncategorized
I’m not planning to pass away anytime soon. Still, I spent some time weekend securing my ‘virtual will’.…
UUncategorized
Last week, I announced (check mailing) leaving advertising agency Boondoggle for research/consultant firm InSites Consulting. Yep, I was…
TThoughts
I am not the person that hates TV. Or TV shows. Or thinks that reading is better than…
UUncategorized
Almost a year ago, I decided to move to Belgium to live with the love of my life,…
This website uses cookies to improve your experience. We'll assume you're ok with this, but you can opt-out if you wish. Cookie settings ACCEPT
Privacy & Cookies Policy