Two weeks ago, Akzo Nobel launched a movie as a tribute to their parting CEO Hans Wijers. A recipe for disaster, but it was actually really really funny and well-executed. But Akzo’s unlikely (?) success on social media goes way beyond that. Last year’s Let’s colour campaign might as well be one of my favorite nudge/social campaigns of all time.

Akzo Nobel might seem like a boring company from the outside. Akzo is no Nike. Or Coca Cola. Or even KLM. Their ambition is to become the world’s leading Coatings and Specialty Chemicals company. Never overheard a kid saying that. Or the coolest guy in the bar. But behind that seemingly boring ambition is a really really interesting company. Have a look at their smart (infogrpahic style) company visualization at a glance or have a look at their brands.

Several of these brands (the paint-related ones) teamed up for the Let’s colour campaign. The basic idea is pretty simple: can we as a specialty chemicals company change communities and people’s lives to better by adding some colour? To test this, several teams set out all over the world. 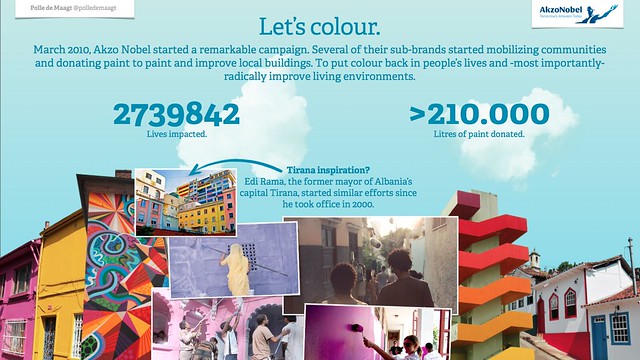 Have a look at their video as well (please turn off your sounds, the let’s colour loop is really annoying after a while).

I just love how Akzo made their impact tangible. More than 2 million lives impacted for the better. And that makes sense. By cleaning up a community, to get rid of greys and replace it by colours, people’s lives will change.
In that perspective, by the way, it is quite interesting how Euro RSCG’s case movie doesn’t even try to prove the impact in people’s live, but focusses on metrics like tweets, pr and views.

Ok. Maybe execution of the campaign could be better. Maybe their campaign site and case movie could be cooler.
Maybe the proof of their impact on daily lives could be more solid.
Maybe they borrowed the idea from Edi Rama.

But let’s face it. Here is an unlikely social brand that makes a difference. That goes beyond ads and actually acts. I can’t wait for more brands to follow this example.

BBest practices
With technology becoming more omnipresent, insight and communication about system performance becomes essential.How to best give insight into…
AActs of kindness
This is a short story about cookies. Not the digital kind, but real cookies. The edible kind. And…
BBest practices
Not sure if you want to buy that cool Droog design stuff? Try it before you buy it.…
BBest practices
Treating guests based on familiarity with your venue makes a difference.How to spot first-time and returning guests early.Indicate…
nnudge
Recently, I stumbled upon a recent feature of document sharing platform Scribd: pay in content. As an alternative…
BBest practices
Be where your customers are.How to find front end developers for your website or startup?Hiring message in the…
This website uses cookies to improve your experience. We'll assume you're ok with this, but you can opt-out if you wish. Cookie settings ACCEPT
Privacy & Cookies Policy